In a village in North Sumatra, long ago there lived a farmer named Toba. He was alone in a fertile and gently sloping valley. He works on his farm to make ends meet.

On the sidelines of his work he loved fishing in the river. the river is so clear and the fish are so many, that he often gets a lot of fish when fishing there.

One afternoon after he came home from work, he took the time to fish in the river. but there is something strange that usually he is very easy to get fish but this time, he hasn’t got any fish. He waited a long time for his fishing bait nothing to attract him. Finally he started to get annoyed and intend to go home from that place. when he pulled his fishing line there was a fish pulling his bait into the middle of the river, he was happy. 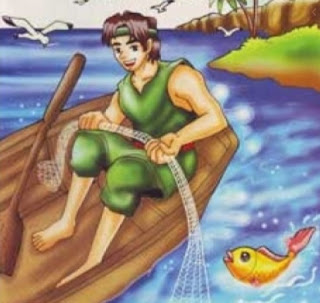 after a while he did the tug of the line, he tugged and pulled. how happy he was because it turned out to be a big fish he got. He then released the fish from his fishing line. when he looked into the eyes of the fish the eyes of the fish were so deep. Then he put it in a container. and he bathed in the river to celebrate the joy of catching such a big fish. Then he returned home.

Arriving at home he went straight to the kitchen and rushed to grill the fish. But the wood in the kitchen had run out, he took the wood behind his house.

When he returned to the kitchen to his surprise, he saw that the big fish was gone. instead lay gold coins in that place. Suddenly he ran away scared and went into the room.

Arriving in the room he was even more surprised because there was a long-haired woman who was facing the mirror combing her hair. Toba, who was standing straight at the door, was immediately mesmerized when the woman turned around. He had never seen a woman as beautiful as this before even though he had traveled a lot to other countries.

After Toba got to know the woman, he finally confessed his love and intended to ask for her hand and the woman stated that she was willing to accept her proposal with certain conditions, namely that Toba had to swear that for the rest of his life he would never bring up the origin of his wife who incarnated from fish. The offer was accepted. Finally they got married.


A year later, they were blessed with a son whom they named Samosir. Samosir is a stubborn and lazy child, one day his mother told him to bring food to his father who was in the fields but he was lazy to do it, finally his mother went alone.

One day, his mother returned to ask Samosir to deliver food for his father who was working in the fields. Because he was told repeatedly, finally the Samosir was forced to take it. On the way he opened the lunch and saw delicious food and a big fish, he ate it and left the rest of the food for his father. When he got there his father was so angry because he had been waiting for a long time, was hungry, and when he saw the contents of the basket were only leftovers. suddenly his father got angry and said. “You little fish!”

Crying, Samosir ran home to meet his mother at home. He complained about everything his father said to him that he was a child of a fish. Hearing her son’s story, the mother was very sad, especially because her husband had broken his oath with the insulting words he said to his son.

A moment later his mother told the samosir to go to a high place and his mother jumped into the river and suddenly turned into a big fish. At the same time, the river was flooded and it was raining heavily. Some time later, the river water had overflowed everywhere and the valley where the river flowed was inundated. Mr. Toba could not save himself, he drowned in a puddle of water. Over time, the puddle became wider and turned into a very large lake which was later called the people of Lake Toba. The small island in the middle is named Samosir Island.

√ [Lengkap] The History of the Battle of Ambarawa and its Explanation!